Merton, born in Prades, France, on January 31, 1915, was the son of Ruth Jenkins (American) and Owen Merton (New Zealander), who were artists. Shortly after his birth, his parents moved to New York to escape World War I. ... At a young age, Merton expressed an interest in spiritual things, but unfortunately neither of his parents provided him with any religious formation. After his mother died when he was six, Merton, a lonely child, traveled with his father in the United States, Bermuda, France, and England. When Merton was fifteen, his father died, intensifying his loneliness, lack of continuity, and need for belonging. As a teen he lived an undisciplined, sensual, and restless life. Although he had received an academic scholarship to Cambridge, he did not apply himself. Due to poor grades and an "unfortunate incident" with a young woman, the uncle who served as his guardian sent him back to New York. When he entered Columbia University, his life began to change.

At Columbia, Merton read Etienne Gilson's The Spirit of Medieval Philosophy, which revolutionized his understanding of God. ... Also while at Columbia, Merton experienced conversion and was baptized into the Catholic Church. [In 1941] he applied and was accepted by the Cistercian Order of the Strict Observance and entered Our Lady of Gethsemani in Kentucky.

At first Merton saw the monastery as a sanctuary where he could disappear from the world. However, he soon discovered that Merton the writer had followed him into the cloister. Fortunately the abbot recognized Merton's literary gifts, and by 1948 The Seven Storey Mountain was a best-seller. During his lifetime, Merton wrote eight volumes of poetry; six hundred articles; and over sixty books, several published posthumously. He wrote devotional meditations, theological essays, personal journals, social criticism, and studies of Eastern spirituality. His books include Contemplative Prayer, New Seeds of Contemplation, The Ascent to Truth, The Wisdom of the Desert, The Sign of Jonas, Seeds of Destruction, Mystics and Zen Masters, and Conjectures of a Guilty Bystander.

If a writing career was unconventional for a monk, Merton's involvement with social issues was even more unusual. From the monastery he wrote about the threat of nuclear war, opposition to American involvement in Vietnam, and civil rights. ... His interest in Eastern spirituality, particularly Buddhism, influenced his decision to attend an East-West monastic conference in Bangkok, Thailand. During this trip Merton was accidentally electrocuted. He died on December 10, 1968, the twenty-seventh anniversary of his entry to Gethsemani. Thomas Merton was a prophetic voice who continues to guide the hearts of those pursuing the interior life, seeking the center of their "true selves," and discovering Christ's mysteriously transforming love.

If Thomas Merton had taken the Spiritual Types Test, he probably would have been a Mystic. Merton is remembered on December 10.
[Excerpted with permission from the entry on Thomas Merton by Amy Sturdivant Jennings, from The Upper Room Dictionary of Christian Spiritual Formation, edited by Keith Beasley-Topliffe. Copyright © 2003 by Upper Room Books®. All rights reserved.] 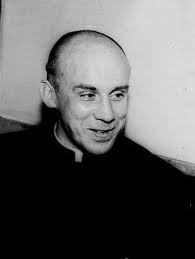