Howard Thurman (1900-81), African-American preacher and mystic. A leading voice for racial justice, Thurman struggled against prejudice all his life but refused to become bitter. He enrolled in Morehouse College, became active in the YMCA, and was exposed to a brilliant sampling of African- American leaders: Franklin Frazier, Benjamin Mays, and John Hope. His acceptance at Rochester Theological School was a special distinction since the school accepted only two black applicants in any given year. Rochester was his first experience in the white world and a difficult one. After seminary he became the pastor of a Baptist church in Oberlin, Ohio, and began graduate work at the Oberlin School of Theology. He was appointed by both Morehouse and Spelman Colleges to teach religion and be chaplain. A lecture series on the spiritual insights of the African-American spiritual became his book Deep River.

In 1935 Thurman was invited by the YMCA and YWCA to chair a delegation of African-Americans on a pilgrimage of friendship to India, Burma, and Ceylon. He accepted, though he was reluctant to be an apologist for segregated American Christianity. He became convinced of the distinction between the religion of Jesus and religion about Jesus. In India he met Gandhi and was quickly persuaded to imitate Gandhi's nonviolence. In 1948 he went to San Francisco, where he founded the Church for the Fellowship of All Peoples. His dreams for a congregation that was both racially integrated and ecumenical came true. After nine years he became dean of the chapel and professor of spiritual disciplines at Boston University. His ministry at the university and his preaching trips around the world had a wide influence.

Among Thurman's many books are The Negro Speaks of Life and Death, The Centering Moment, Jesus and the Disinherited, Meditations of the Heart, Disciplines of the Spirit, and his autobiography, With Head and Heart.

If Howard Thurman had taken the Spiritual Types Test he probably would have been a Mystic. Thurman is remembered on October 22.

[Excerpted with permission from the entry on Howard Thurman by Howard L. Rice, from The Upper Room Dictionary of Christian Spiritual Formation edited by Keith Beasley-Topliffe. Copyright © 2003 by Upper Room Books®. All rights reserved.] 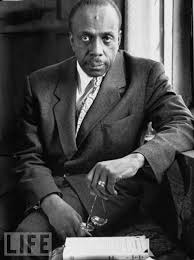