John Climacus (ca. 579-649), Orthodox monk and spiritual writer. At age sixteen John Climacus joined the monks at Mount Sinai and pursued the common life. After taking final vows at age nineteen or twenty, John retired into solitude as a hermit at Tholos, near Mount Sinai, where he claimed to receive the gift of tears and the grace of unceasing prayer. After forty years at Tholus, he was elected abbot of Sinai, and while serving there he wrote his famous The Ladder of Divine Ascent. From then on he has been known as John of the Ladder, Climacus in Latin.

The Ladder was written by a monk for monks. John believed, however, that every Christian needed a personal encounter with God. In the book, he sought to evoke in the reader an experience similar to his own. Using the image of Jacob's ladder, John proceeded in thirty steps to guide the initiate into a process of sanctification and divine union. ... The Orthodox Church so reveres the work that it is read in the monasteries and refectories every year during Lent.

John, a mystic of light rather than divine darkness, avoids apophatic language and does not intend that his "steps" be taken literally or dogmatically. His view of spiritual formation is dynamic and progressive: The goal of perfection is not arrival but a process of moving from glory to glory whose summit is Love.

A Spanish translation of Climacus was the first book printed in the New World (Mexico, 1532).

If John Climacus had taken the Spiritual Types Test, he probably would have been a Mystic. John is remembered on March 30.

[Excerpted with permission from the entry on John Climacus by Thomas C. Webb, The Upper Room Dictionary of Christian Spiritual Formation, edited by Keith Beasley-Topliffe. Copyright © 2003 by Upper Room Books®. All rights reserved.]

Image is thirteenth century icon of St. John Climacus, to either side are Saint George and Saint Blaise. Tempera on wood, 109x67.4x3.3, Russian Museum, Saint Petersburg. 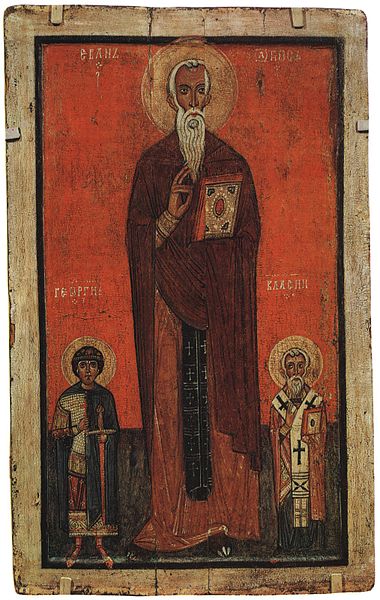